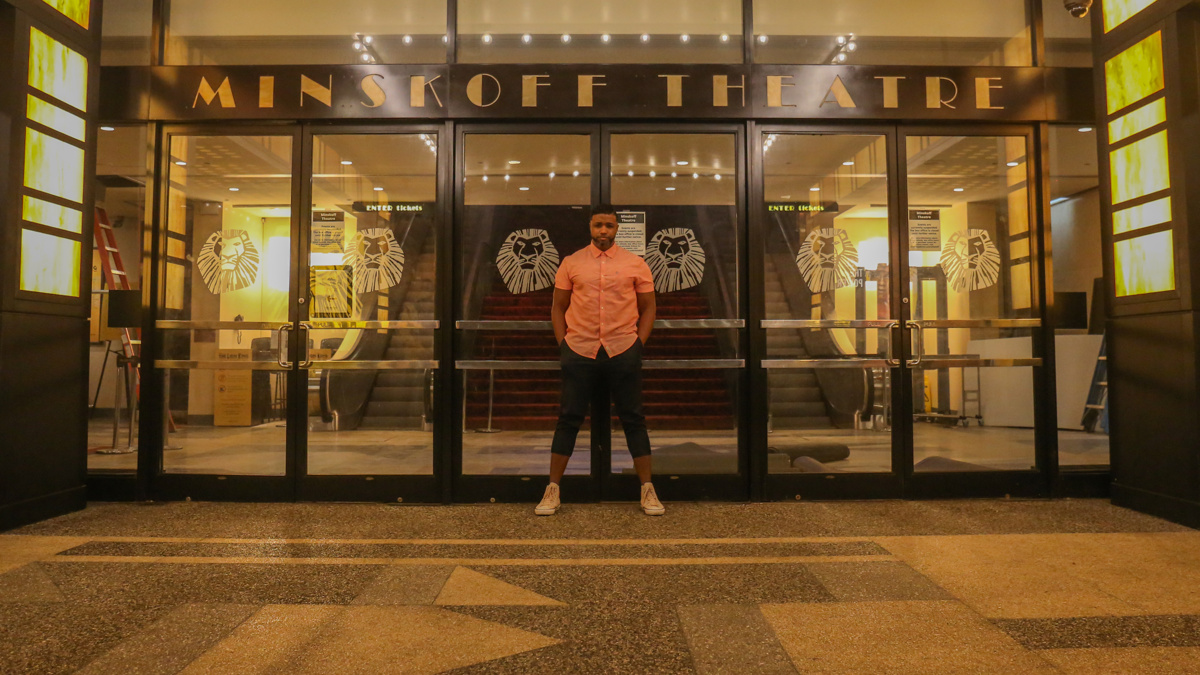 Living near the theater district during the Broadway shutdown, photographer and performer Matthew Stocke has been haunted walking past the empty palaces sitting in repose, waiting for the lights and stars to return. In this new Broadway.com photo feature, he reunites members of the theater community with their Broadway home #AwayFromHome.

Though the shutdown is keeping The Lion King‘s L. Steven Taylor from his regular perch on Pride Rock, Broadway’s Mufasa is still tending to his dynasty. In addition to working on his own musical during this time, he is also reflecting on conversations being had in the industry and what they mean for the aspiring theater makers, including his own son.

“I grew up in a really underserved area in Indianapolis—theater just wasn’t something that was accessible to me. When I got into the music department at my high school, one of my choir teachers took me to see a production of Les Misérables. There was a Black guy who was playing Javert. That’s my dream role—one of them. I feel like seeing him, seeing some type of representation of who I was up on the stage at that time, really changed the course of my life. I thought, ‘Oh, I can actually commit to this. There are people who are doing it who look like me. Maybe I could be that someone for the people who come behind me.’ I joined the company of The Lion King—oh, man. I think 13 years ago. I left the show to go do other stuff a couple of times, but it’s kind of a show that keeps just calling me back. There is a real sense of community. It’s home base for me. I felt like I was having an identity crisis without going into the theater eight times a week….When I originally joined the show, I was in the ensemble, and I was the Mufasa understudy. I think finding my way in the role of Mufasa also helped me find my way as to who I am as a father in real life. My son is studying musical theater right now. He’s a sophomore at Carnegie Mellon. I feel like we are at a turning point. We’re setting up what Broadway is going to be for the next generation. As a Black performer, being part of the conversations that are taking place right now—what we want theater to look like, what stories we tell and who’s telling those stories—to be part of those conversations in this moment of time definitely makes me proud. There is a weight that also comes with that: the weight of the responsibility for getting it right for all of these kids who are coming behind us. It’s definitely not lost on me….I’m really looking forward to seeing how everybody bounces back from this. I’ve been writing a musical with a castmate of mine. We started this two years ago. It’s based on what we’re experiencing right now and how it parallels some other times in history. I’m really looking forward to seeing what is born out of this, both creatively and interpersonally.”