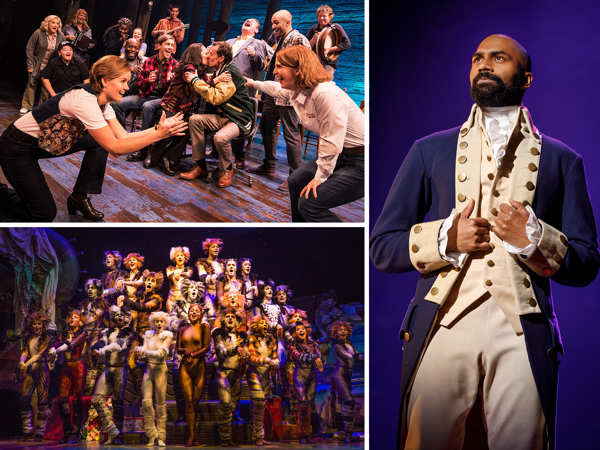 The biggest hits on the Great White Way are headed to Indianapolis as part of the just-announced Broadway in Indianapolis 2019-2020 season!

Broadway blockbusters Come From Away, Hamilton and Cats will be part of the upcoming season. The series will also include Fiddler on the Roof, The Play That Goes Wrong and Anastasia.

Learn more about all of these exciting stage hits below!

FIDDLER ON THE ROOF
October 1 – 6
Fiddler on the Roof is the heartwarming story of fathers and daughters, husbands and wives, and life, love and laughter. This classic musical is rich with Broadway hits, including “To Life (L’Chaim!),” “If I Were A Rich Man,” “Sunrise Sunset,” “Matchmaker, Matchmaker” and “Tradition.” The original Broadway production of Fiddler on the Roof, which opened in 1964, was the first musical in history to surpass 3,000 performances. The show won the 1965 Tony Award for Best Musical, in addition to eight other Tony Awards that year. This acclaimed revival proudly introduces a new generation to the iconic musical adored across the globe.

HAMILTON
December 10 – 29
Hamilton is the story of America’s Founding Father Alexander Hamilton, an immigrant from the West Indies who became George Washington’s right-hand man during the Revolutionary War and was the new nation’s first Treasury Secretary. Featuring a score that blends hip-hop, jazz, blues, rap, R&B, and Broadway, Hamilton is the story of America then, as told by America now.

COME FROM AWAY
January 21 – 26, 2020
The true story of the small town that welcomed the world. Broadway’s Come From Away has won Best Musical all across North America! The New York Times Critics’ Pick takes you into the heart of the remarkable true story of 7,000 stranded passengers and the small town in Newfoundland that welcomed them. Cultures clashed and nerves ran high, but uneasiness turned into trust, music soared into the night, and gratitude grew into enduring friendships. Don’t miss this breathtaking new musical written by Tony Award nominees Irene Sankoff and David Hein, and helmed by Tony Award-winning Best Director, Christopher Ashley. Newsweek cheers, “It takes you to a place you never want to leave!” On 9/11, the world stopped. On 9/12, their stories moved us all.

THE PLAY THAT GOES WRONG
February 25 – March 1, 2020
What would happen if Sherlock Holmes and Monty Python had an illegitimate Broadway baby? You’d get The Play That Goes Wrong, Broadway and London’s award-winning smash comedy! Called “a gut-busting hit” (The New York Times) and “the funniest play Broadway has ever seen” (HuffPost), this classic murder mystery is chock-full of mishaps and madcap mania, delivering “a riotous explosion of comedy” (The Daily Beast). Welcome to opening night of The Murder at Haversham Manor where things are quickly going from bad to utterly disastrous. With an unconscious leading lady, a corpse that can’t play dead, and actors who trip over everything (including their lines), it’s “tons of fun for all ages” (HuffPost) and “comic gold” (Variety)—sure to bring down the house!

CATS
March 31 – April 5, 2020
Cats, the record-breaking musical spectacular by Andrew Lloyd Webber that has captivated audiences in over 30 countries and 15 languages, is now on tour across North America! Audiences and critics alike are rediscovering this beloved musical with breathtaking music, including one of the most treasured songs in musical theater—”Memory.” Winner of seven Tony Awards, including Best Musical, Cats tells the story of one magical night when an extraordinary tribe of cats gathers for its annual ball to rejoice and decide which cat will be reborn. The original score by Andrew Lloyd Webber (The Phantom of the Opera, School of Rock, Sunset Boulevard), original scenic and costume design by John Napier (Les Miserables), all-new lighting design by Natasha Katz (Disney’s Aladdin), all-new sound design by Mick Potter, new choreography by Andy Blankenbuehler (Hamilton) based on the original choreography by Gillian Lynne (The Phantom of the Opera) and direction by Trevor Nunn (Les Miserables) make this production a new Cats for a new generation!

ANASTASIA
May 26 – 31, 2020
From the Tony Award-winning creators of the Broadway classic Ragtime and inspired by the beloved films, Anastasia is the new Broadway musical that’s “one of the most gorgeous shows in years” (The New York Observer). This dazzling show transports us from the twilight of the Russian empire to the euphoria of Paris in the 1920s, as a brave young woman sets out to discover the mystery of her past. Pursued by a ruthless Soviet officer determined to silence her, Anya enlists the aid of a dashing conman and a lovable ex-aristocrat. Together, they embark on an epic adventure to help her find home, love and family.

For more information about the series and the benefits of being a subscriber, click here.