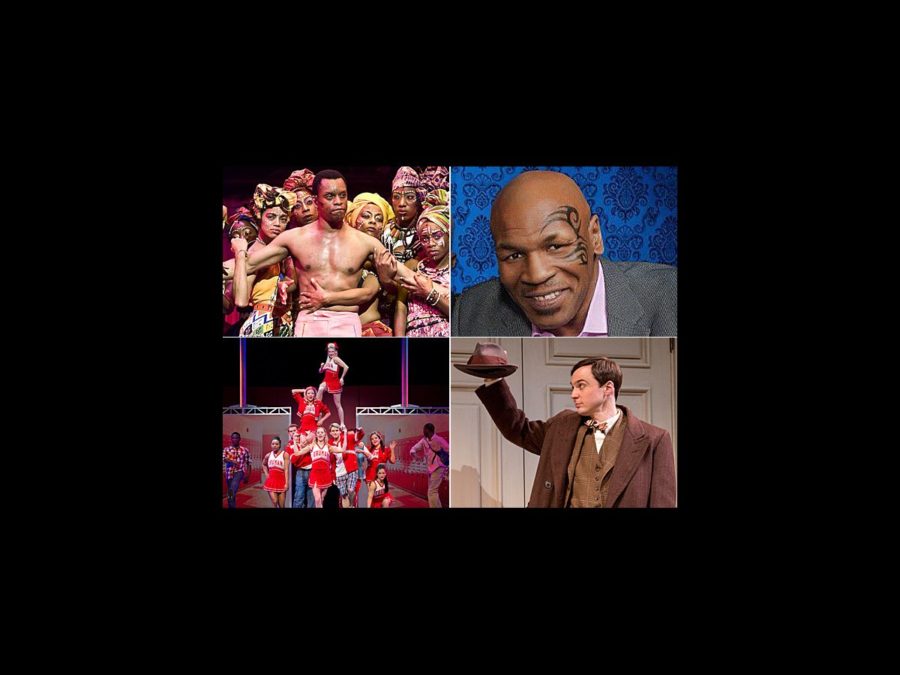 Broadway Buzz: Jim Parsons, the Cheerleaders of Bring It On and Mike Tyson Bring Summer Heat to Broadway


While Tony-winning hits like Once and Newsies rake in box office dollars all summer, Broadway is gearing up for a vacation season packed with hot new shows, big stars and, of course, a relaxing reprieve from the intense heat. In this first official week of summer, Broadway.com gives you a look at what’s ahead, including Jim Parsons’ Broadway return, a musicalized version of Bring It On, Mike Tyson’s stage debut (we’re serious) and more.

Harvey
On hiatus from filming his Emmy-winning turn as Sheldon on TV's The Big Bang Theory, Jim Parsons takes on the role made famous by Jimmy Stewart in Harvey. Last on stage in the Tony-winning revival of The Normal Heart, Parsons is now charming audiences at Studio 54 as Elwood P. Dowd, the sweet, mild-mannered brother and uncle who showers people with politeness…and talk of his six-foot-three-and-a-half-inch-tall rabbit best friend, Harvey. Elwood’s concerned sister (Tony nominee Jessica Hecht) takes him to the local sanitarium, where, naturally, nothing goes according to plan. Click below to see Broadway.com’s Word of Mouth panelists rave about Harvey, which plays through August 5.

Fela!
The Tony-nominated musical that introduced Broadway audiences to Afrobeat rhythms returns to the Rialto for the summer with its acclaimed original star, Sahr Ngaujah. Based on the life and music of Nigerian composer and musician Fela Anikulapo Kuti, Fela! will enjoy a limited engagement at the Al Hirschfeld Theatre from July 9 through August 4. Conceived, choreographed and directed by Tony Award-winning Spring Awakening choreographer Bill T. Jones, the musical was a hit during its original Broadway run from November 2009 to January 2011, racking up 11 Tony nominations. Click below to see opening night footage with Ngaujah and the original Broadway cast, including what our Word of Mouth panelists had to say about the show.

Bring It On
Get ready to cheer when the musical adaptation of the popular 2000 film Bring It On cartwheels across the St. James Theatre stage from July 12 through October 7. The lively new tuner mixes the high-stakes world of competitive cheerleading with cutthroat high school politics. The show is led by an A-list creative team, including direction and choreography by Andy Blankenbuehler (In The Heights), music by Lin-Manuel Miranda (In the Heights) and Tom Kitt (Next to Normal), lyrics by Miranda and Amanda Green (High Fidelity) and a book by Jeff Whitty (Avenue Q). Watch Bring It On’s creators discuss how they collaborated on the new musical in the video below.

Mike Tyson: Undisputed Truth
We can only speak the truth: Mike Tyson is coming to Broadway in a one-man show in which he promises to do a heap of truth-telling himself. In Undisputed Truth, the famed boxer will share aspects of his colorful life, including his battle with drug abuse, bankruptcy, a 1992 rape conviction that resulted in a three-year prison term, his conversion to Islam and his prolific boxing career. As if that wasn’t enough, film auteur Spike Lee will direct the show, which is scheduled to play a two-week run, July 31 through August 12, at the Longacre Theatre. Check out Broadway.com's video of Tyson’s recent press conference promoting the show.