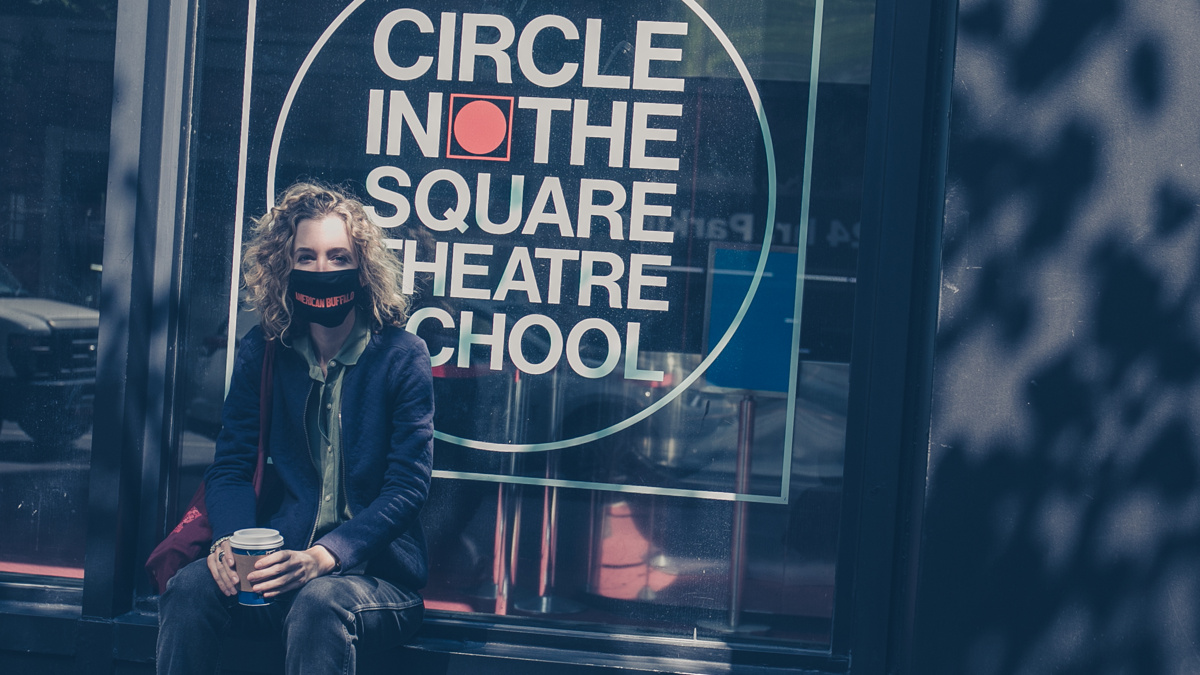 Living near the theater district during the Broadway shutdown, photographer and performer Matthew Stocke has been haunted walking past the empty palaces sitting in repose, waiting for the lights and stars to return. In this new Broadway.com photo feature, he reunites members of the theater community with their Broadway home #AwayFromHome.

Samantha Watson was days away from beginning tech rehearsals at the Circle in the Square Theatre with the company of American Buffalo when the Broadway shutdown announcement arrived on March 12. After stage managing the starry 2014 Broadway revival of The Real Thing as well as Significant Other and many off-Broadway shows likeLazarus, The Secret Life of Bees and more, she was gearing up to get into the height of the theater season alongside stars Darren Criss, Laurence Fishburne and Sam Rockwell and director Neil Pepe. Here, Watson discusses what stage management means to her and what happened when the cast got the news on that fateful Thursday.

“I sort of fell into theater and stage management by accident. When I was a sophomore in high school, my dad’s job transferred us from Northern Virginia to Central California, which is a rough age to move across the country. And to Fresno of all places—not super sexy. With the transfer, somehow I was ahead of credits and so I could take an elective. It was either drama or journalism. I said, ‘I guess I’ll do drama.’ The theater teacher happened to sense that I had a natural leadership. I enjoy organization; I felt confident working with my peers in a slightly formal authority kind of way. She asked me to stage manage The Scams of Scapin, a Molière piece. I was hooked. We had a theater that all four high schools shared. It was a proper theater with a fly rail, lightboard, soundboards and dressing rooms—the whole kit and caboodle. My school district was very lucky because we actually had a really well-funded arts program, which is so rare, unfortunately, now….Laurence, Sam and Darren—they’re tremendous actors, and they’re just the loveliest guys you’d ever want to meet. It was really amazing to see actors who have done so well in TV and film be thrilled to be back in the theater. Being there and being able to facilitate that process for them and see their joy, that brought me joy….On the fateful Thursday, we were three days from tech. We were on the runway ready to take off, essentially. That Thursday morning, my team and I had gone to the theater because props was loading in. Everything was almost ready. We went there just to check in on the progress, and then went down to rehearsal. We were doing a 12-6PM rehearsal that day. The announcement came out midday. Once that came out, we stopped rehearsing. It was such a surreal moment. In the rehearsal room, there was a really old, beat-up piano—not in tune really at all—super junky. Darren found it and started playing various songs and singing. He played ‘New York State of Mind.’ That was a really beautiful moment, at least for me. I felt like we were all very united in that moment…. I’ve lived here for almost 10 years, and I feel really fortunate that I’ve been able to work pretty consistently and have been embraced by the theatrical community. I’ve been fortunate enough to have a lot of great experiences at a fairly young age, and that’s because someone took a chance on me. When I’m hiring my stage management team, I think about that constantly. I’m always saying, “Can I create an opportunity for someone on this show?’…I do what I do because I love it. I love that I get to go to work every day and solve problems. I get to make people’s visions happen. I see the process as so collaborative. I love working with people—that’s what I’m most looking forward to when Broadway is back.”